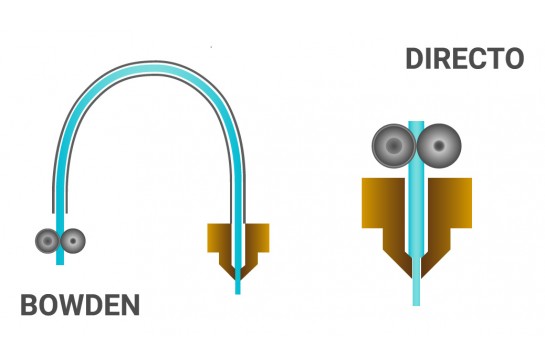 One of the most important elements of a 3D FDM printer is the set consisting of the extruder and the hotend.

The hotend is the element intended to melt the filament so that it can flow through the nozzle, while preventing heat from being transmitted outside of the so-called hot zone.

For this, the hotels generally have four parts:

On the other hand, the extruder is responsible for pulling the filament into the hotend so that sufficient pressure is generated inside the hotend so that the molten material flows constantly and homogeneously through the nozzle. 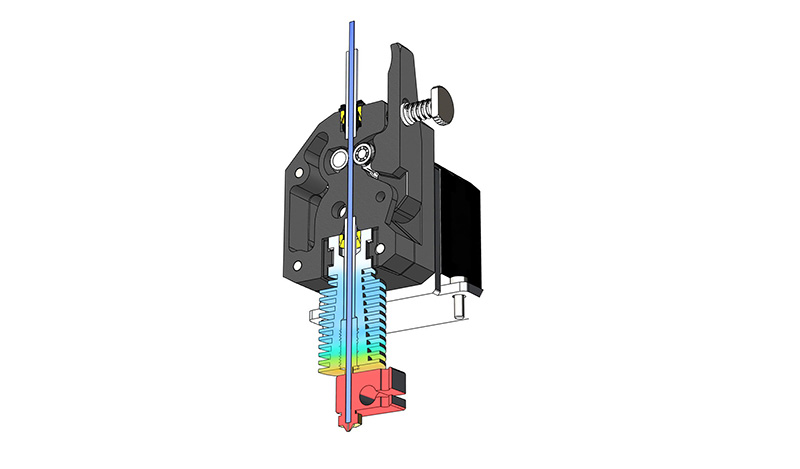 There are currently two ways to combine the hotend with the extruder: direct extrusion systems and Bowden systems. 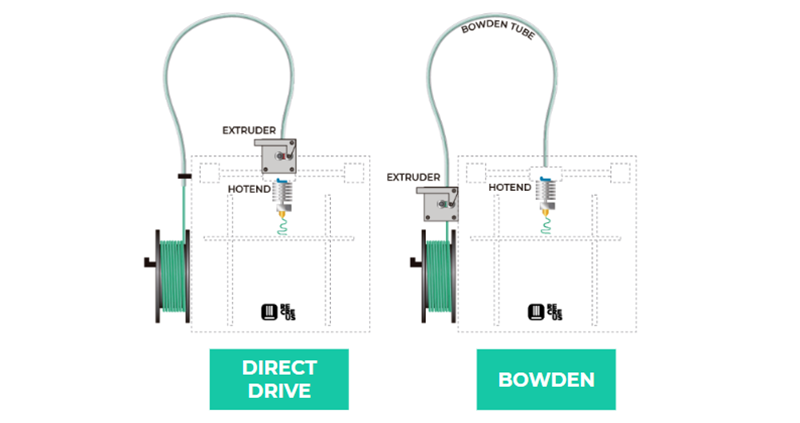 In direct extrusion systems the extruder and the hotend form a single element, minimizing the distance between the pulling point and the nozzle.

In Bowden extrusion systems the extruder is held fixed in the frame of the 3D printer and pushes the filament into the hotend through a tube called a Bowden tube.

Although there has been much discussion about which of the two systems is better, both have great advantages, as well as some disadvantages. Choosing the most appropriate one will depend on several factors such as the type of material that is commonly used, the printing speeds or the quality of the printer's frame.

When the extruder pushes the filament toward the hotend, the filament compresses creating the necessary pressure inside the nozzle for the molten material to flow properly. However, when we do not want to extrude material, it will not be enough to stop pushing the filament, since the residual pressure due to compression will make the material continue to flow. This is why every time the hotend is moved to a new position and it is not necessary to add material, the filament must be retracted the necessary distance so that it can decompress and release the pressure inside the nozzle. This is known as retraction and is of great importance in the 3D printing process.

Since plastics are generally not rigid materials, the greater the distance between the extruder and the hotend, the greater the compression of the filament required to achieve adequate pressure at the nozzle. This also makes the retraction distance necessary to release that pressure greater. This is why while in direct systems the retraction distances are usually between 0.8 mm and 2 mm, in Bowden extrusion systems they can reach values ​​of 5 or 6 mm.

Being able to use low retraction values ​​has important advantages. On the one hand, the retraction times are lower, which in parts that involve many retractions can represent a significant reduction in printing time. On the other hand, a low retraction distance minimizes the risk of the molten part of the filament reaching the cold zone of the hotend, thus preventing it from solidifying and expanding causing a jam.

It is this last factor that causes bowden extruders to require more complex and accurate retraction calibration since there is a very small margin between a retraction value that is too low to cause oozing or stringing and a too high one that causes clogging.

Another direct consequence of the distance between the extruder and the hotend is the behavior of the flexible filaments.

In Bowden systems, the filament is guided from the extruder to the hotend through a tube, usually Teflon. Although the ideal internal diameter of the tube would be the same as that of the filament, in practice this is not feasible, both due to small diameter variations due to manufacturing tolerances and the high friction forces that would be generated. This is why all Bowden tubes have some clearance, and although with most materials this is not a problem, with flexible tubes it is.

Image 5: Flexion of the filament inside a Bowden tube. Source: E3D.com

Due to their high flexibility, materials such as TPU and TPE tend to flex within the Bowden tube, diverting tensile forces from the extruder to the tube walls. This makes it very difficult to achieve constant pressure on the nozzle to ensure correct extrusion.

In addition, in flexible materials, the compression of the filament necessary to achieve the adequate pressure in the nozzle is much greater than in the case of other materials such as PLA, which in many cases causes the need to use excessively high retraction distances.

Despite all this, with some experience, those flexible materials of greater hardness can be printed on Bowden systems, especially when used in 2.85 mm or 3mm format, avoid the use of retractions and use a high quality and tight diameter Bowden tube like the Capricorn XS. 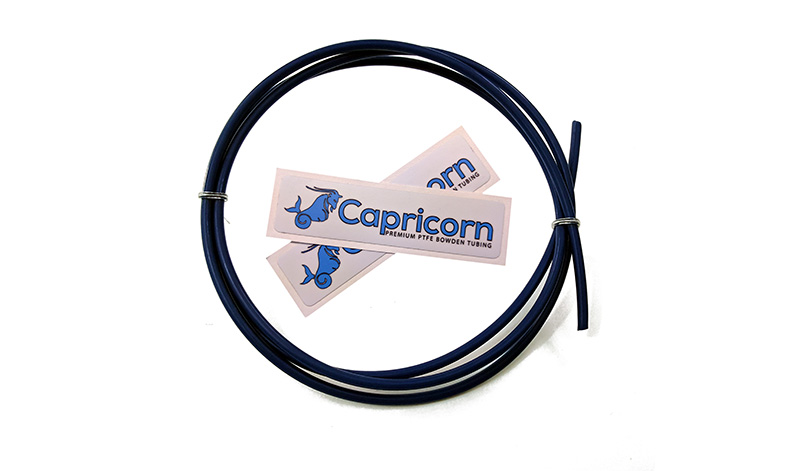 Without a doubt, the ideal system for working with flexible materials is direct extrusion. The short path between the extruder and the hotend minimizes the compression of the filament and allows it to be tighter, preventing it from flexing inside. Those so-called compact extruders, such as the Titan Aero or especially the E3D Hemera, make it possible to use all kinds of flexible materials in a simple way and with a high print quality.

Despite the fact that both in terms of shrinkage and in the use of flexible filaments, direct extrusion systems are victorious, there is one characteristic in which Bowden systems stand out and that for certain applications can be of great importance: inertias.

One of the basic printing parameters is speed. And although many printers allow speeds of up to 80 or 100 mm / s to be used, there is a threshold speed beyond which it is impossible to print without sacrificing part quality. This is because the hotend cannot move at a constant speed, but each time it changes direction it must decelerate to a certain speed of change of direction and then accelerate again.

This is because of Newton's first law. Due to the mass that the hotend has, when moving it has a certain inertial force, the greater the greater its mass or speed. When making a change of direction, the inertia force is transmitted to the rest of the printer causing vibrations and a significant loss of precision. To avoid this, before changing direction, it is necessary to reduce the speed to a value that will mainly depend on the rigidity of the printer's structure and the weight of the hotend. A less robust and light structure will imply using lower direction change speeds and slower acceleration and deceleration curves, since its capacity to absorb inertias will be less, which will imply lower speeds and longer printing times. The only way to reduce inertia is to reduce speed or weight. 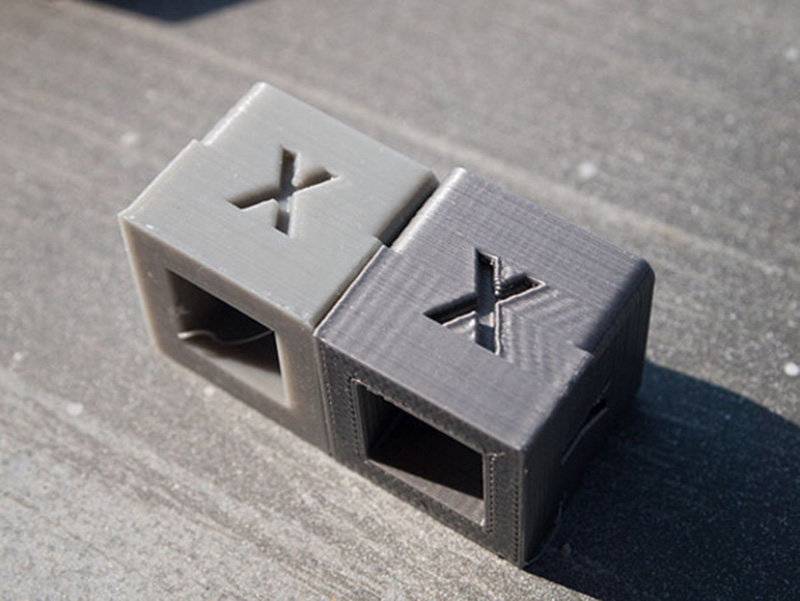 And it is here where the Bowden systems play with advantage. By fixing the extruder, which is the heaviest part, and moving only the hotend, the inertia is greatly reduced. This allows 3D printers with Bowden systems to use significantly higher print speeds than those with a direct system, without sacrificing print quality.

Choice between a Bowden system and a direct one.

The choice between a direct system and Bowden will basically depend on whether printing speed takes precedence or the versatility and ease of using new materials.

If you are looking to produce the most parts in the shortest time and in general only few materials and rigid materials such as PLA or PETG are used, a printer with the Bowden system will be the best solution.

On the other hand, if the priority is to use technical and elastic materials and obtain the best possible quality at the cost of sacrificing printing speed, a direct extrusion system will be the ideal option.