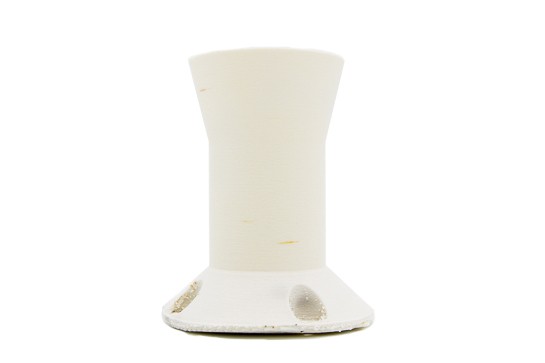 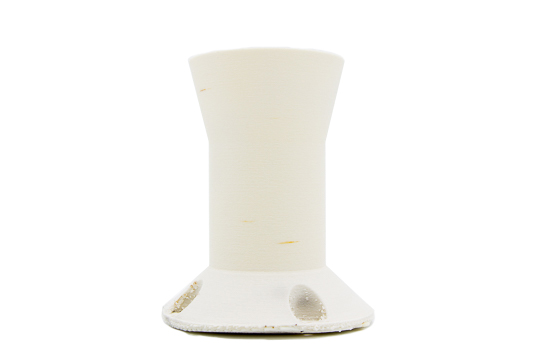 In the use of 3D printers (FFF/FDM), problems and unforeseen events (especially in non-professional 3D printers) can appear when printing the models that the user needs. This causes inconvenience, delays and other inconveniences that the user of the 3D printer never wants to happen to him. This article then provides a series of advice on how to solve these typical problems.

Absence of filament at the beginning of printing

When printing begins, it may be the case that no amount of filament is released. This may be due to:

Base height very close to the nozzle

This is solved by making a leveling of the base.

Due to waiting at the beginning of printing, it may be the case that the material that is at the end of HotEnd is deposited in the base due to the effect of gravity itself, causing an absence of material at the time of printing.

If the tensioner is very loose, it can happen that the filament does not move through the extruder, however, if it is very tight, it will mark the filament causing poor surface quality of poor quality.

This problem is one of the worst that can happen to a 3D printer. When this happens, the first step is to overheat the temperature in about 10 - 20 °C in reference to the last material used and introduce a cleaning filament (Smart Clean cleaning filament) until it comes out clean and continuous.

A good trick is to activate the option of the contour line around the piece (skirt) and thus ensure the output of material from the extruder before starting the printing of the piece itself. 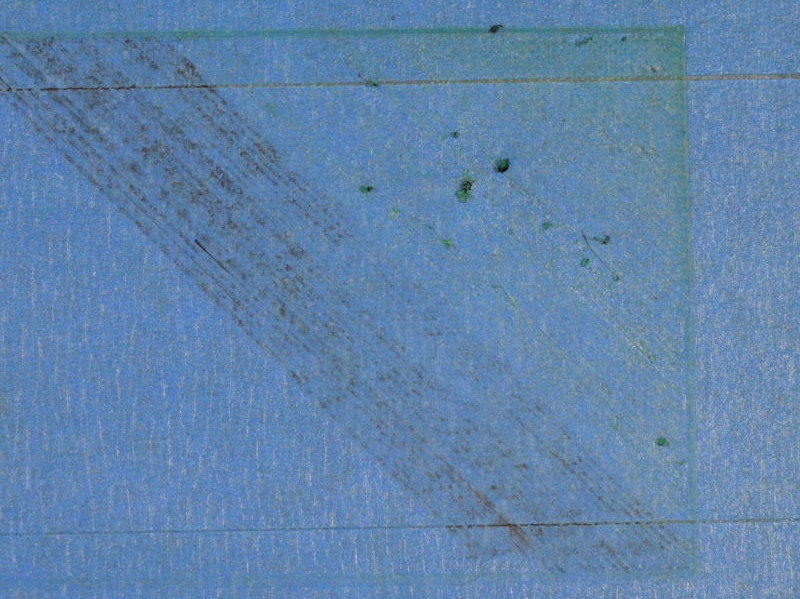 Image 1: Absence of filament at the beginning of printing. Source: Simplify3D.

Problems with the first layer

Having solved the problem of the lack of filament at the beginning of printing, it may happen that the first printed layer does not adhere to the base. This may be due to:

Too much height between the extruder and the base

This problem is observed by visually checking this distance, when the 3D printer is making the first layer.

Certain types of filaments need the base to have a temperature higher than that of the environment, for example ABS. If this parameter is not met, surely this problem appears. Apart from the temperature, there are materials that require an adhesive for the base (DimaFix or Magigoo). Before applying these adhesives it is advisable to wash the base well.

For most 3D printers a first layer speed of 25 mm/s is recommended. If this speed is significantly exceeded, the risk that the first layer does not adhere to the base is very high. 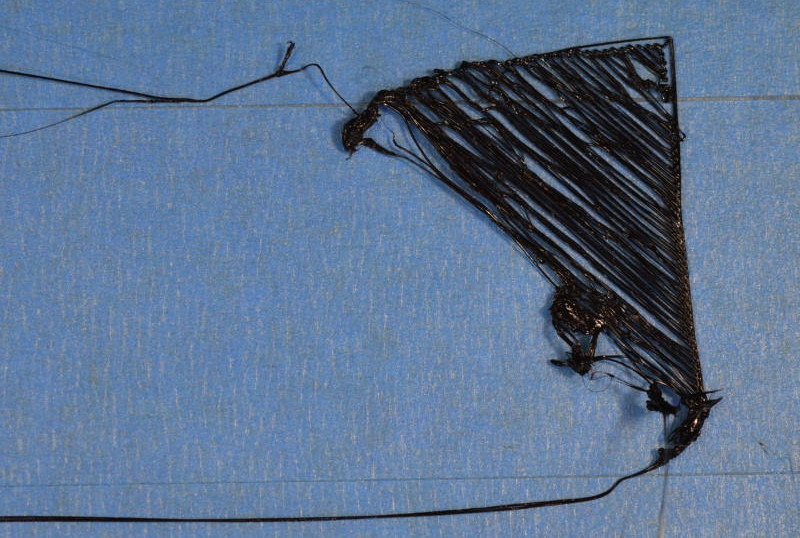 It is common to see in 3D prints threads of material surrounding the piece or between the pieces that are being made simultaneously. This error is usually due to parameters linked to the retraction of the extruder:

This error is very common in "bowden" systems, where there is a long distance between the extruder engine and the Hotend. This distance varies with the type of material, being 8 mm a good measure to start and increase if the problem persists.

For this parameter, the size of the piece and the distance between pieces must be considered. If the part or distance is small, more speed is needed to give the extruder motor time to make the filament recoil path. If the speed is excessive, bubbles will be created inside the HotEnd and the extruder pulley will mark the filament a lot. 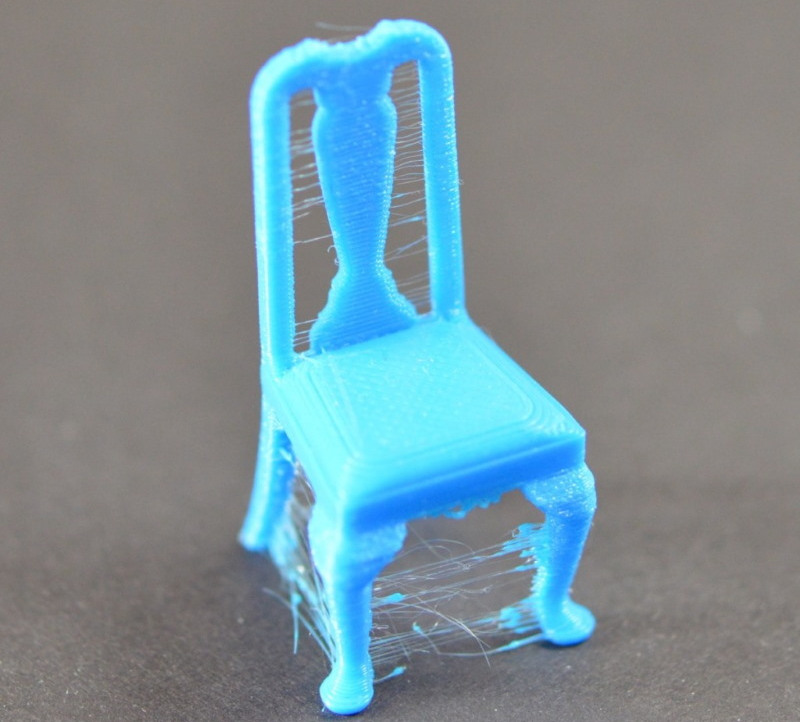 When this printing error is visible, it is because there were filament remains on the outside of the nozzle. These depositions become viscous with the temperature and with the movement of the extruder they are transferred until arriving at the piece that is being printed. These depositions usually occur at the beginning of printing, at the time that the extruder performs in the "home" of the z axis, remains that hang from the nozzle are placed on the outside of it. To avoid the problem, at the beginning of the printing it is necessary to check that this does not happen, and in case it happens, remove the filament from the nozzle with tweezers.

This problem is one of the worst due to the delay that occurs in the time of printing a piece, and, because it occurs for reasons that are easy to correct. Before starting an impression, ensure that the amount of filament available is sufficient, weighing the filament. A practical tip (small or medium pieces) to approximate the available filament length is to measure the diameter of the rolled filament, calculate its perimeter and multiply it by the number of turns in the coil. Another reason may be that an overlap of the filament occurs, preventing the material from entering the pulley of the extruder motor. Finally, if the tensioner of the extruder pulley does not have enough tightening, the filament will not advance through it, stopping the exit of material through the nozzle. 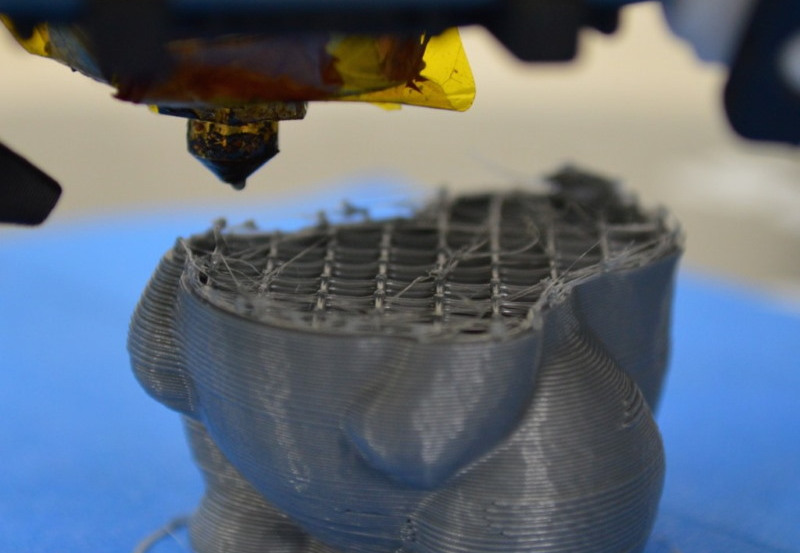 3D FDM printing works by building objects layer by layer until the desired shape is obtained. If the adjacent layers do not join correctly, the final piece can be broken by joining the layers. This problem may be due to two reasons:

During 3D printing of a part, it must be ensured that each layer that is being manufactured presses on the lower layer sufficiently so that the two layers are joined in a resistant way. It can be taken as a general rule that the layer height cannot be more than 80 % of the nozzle outlet diameter. For example, when using a 0.4 mm nozzle, the layer height should not be greater than 0.32 mm. If a separation between layers is detected during printing, it is recommended to reduce the layer height.

Once the layer height is verified to be correct, but the separation between layers persists, the problem is in the extrusion temperature. If the temperature reached by the filament is not hot enough, the adhesion with the lower layer will be bad, which will cause it to easily break the piece. For example, thel PLA can be printed at 180 °C but when a user makes parts with high speeds (60 mm/s), the extrusion temperature is not enough for the layers to adhere strongly, so the temperature must be increased at intervals of 10 °C until a good connection between layers is achieved. 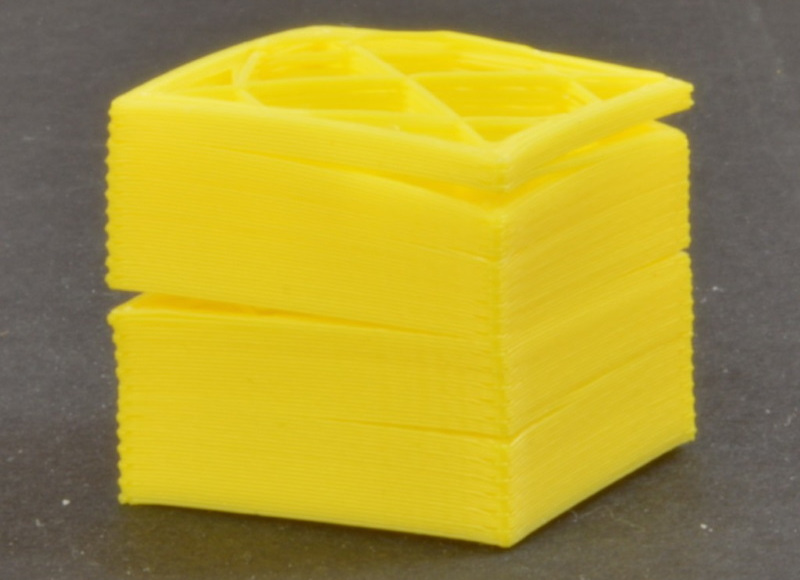 Lack of material between the outer layers and the filling (overlap)

This symptom is easily determined, since you only have to observe the piece with determination a few seconds and see the separation between the outer layers and the filling. To solve it, you must increase the percentage of "overlap", which is usually 15 %, raise it to 20 % or 25 % if you have this problem. 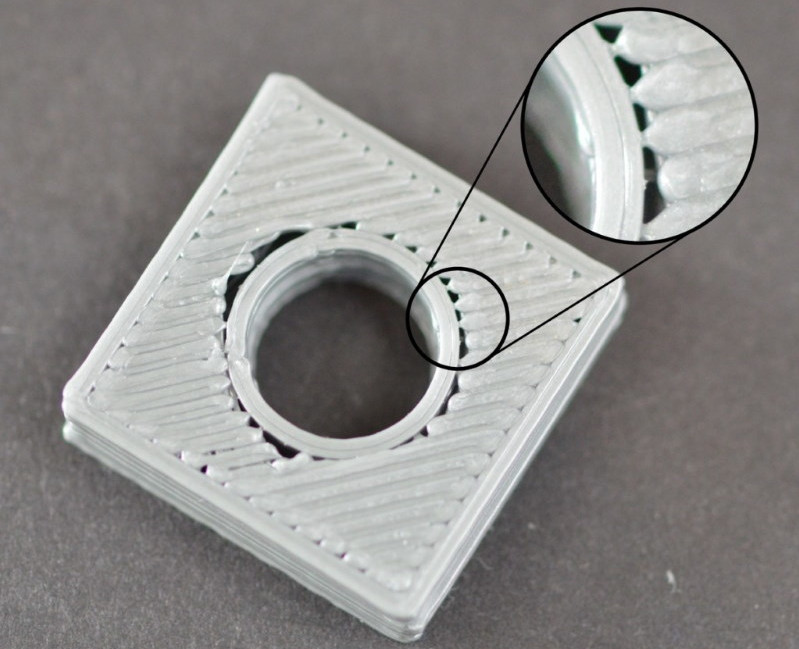 It is called "warping" to buckling the layers of a piece that are in contact with the base. This buckling is common in materials such as ABS, materials with high extrusion temperatures and which tend to deform as they cool. To avoid this problem, we usually resort to:

Currently most 3D FDM printers have a hot base for printing. For materials sensitive to temperature changes, such as ABS, using a base temperature of 100 - 120 ºC is key to maintaining dimensional stability.

When a user wishes to make parts in ABS of medium or large size, using only a hot base is not enough to prevent warping. In this case the 3D printer must have an enclosed and in case you need to make large volume parts, a heated environment is recommended. 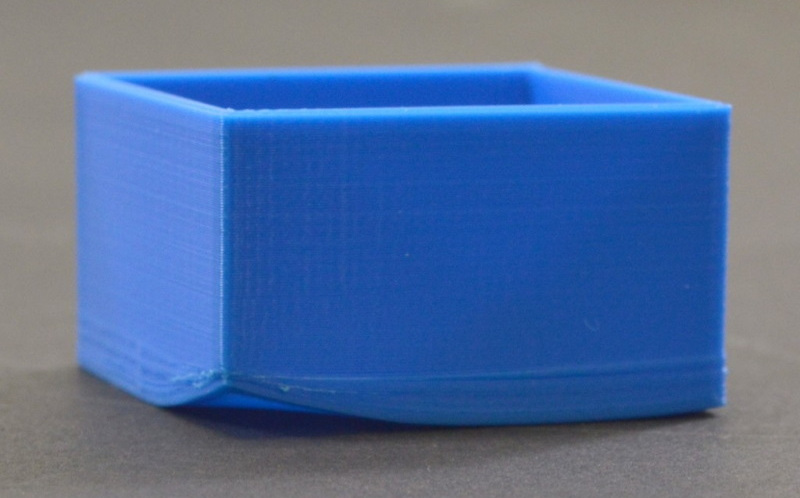 Gaps between the passes of the last layer

When a poor finish of the upper layer is observed, with an aspect that conveys a feeling of lack of material it may be due to a slightly dense inner filling, with holes that are too large and difficult to cover. Another factor that produces this is an insufficient number of layers after filling, to completely cover the surface. This error may also appear due to insufficient filament flow, especially in large pieces, where continuous passes are large. To check if there is a problem of low flow, a check of external measurements is made, if these are smaller, the flow must be increased from 5 % to 5 % until the part has the design measure. 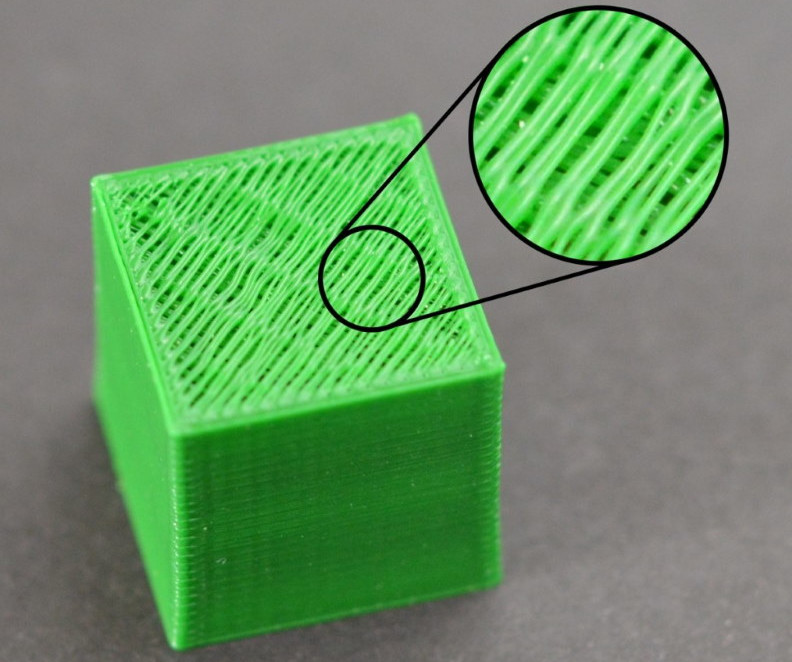 Image 8: Gaps between the passes of the last layer. Source: Simplify3D

With everything explained above, users of a 3D FDM printer should know how to solve most of the problems that can occur in the day to day of 3D printing.