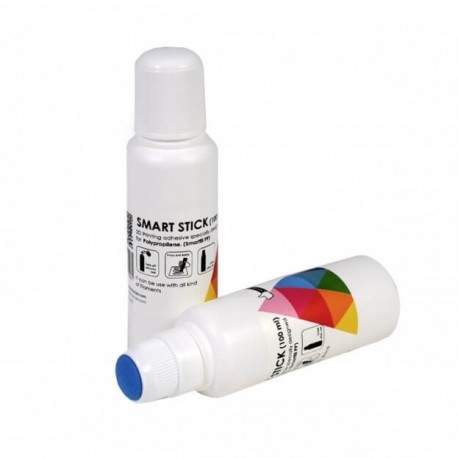 One of the reasons why Polypropylene (PP) has not been very successful in 3D printing so far has been due to the difficulty of printing it, due to the high warping effect that had the common polypropylene filaments. Due to this problem the Spanish company "Smart Materials 3D" has been developing the new filament of Polypropylene PP Smartfil (1.75mm or 2.85mm) which is a PP filament especially additive in order to improve its adherence to the printing surface and thus reduce the warping effect.

Until now, the only way to get the polypropylene impressions to the base was to use polypropylene packaging tape on the base of the 3D printer (due to the affinity between the same material). But after months of research, Smart Materials has managed to develop an adhesive liquid called Smart Stick that makes it possible to print polypropylene filament without having to apply PP packing tape on the base, which is more complicated to apply and there are usually bubbles in the base that leave marked the impression.

Smart Stick is a adhesive liquid used to improve the adhesion of the parts manufactured by FDM with the manufacturing surface. With this liquid a strong contact adhesion is obtained eliminating the warping produced by the contraction of the material during the printing due to the thermal difference produced.

Smart Stick is especially indicated for use with Smartfil PP (Polypropylene). Because of the chemical nature of polypropylene, its use for 3D printing is really complicated, due to the incompatibility of this material with most existing adhesive materials, causing the piece not to adhere to the surface. For this, Smart Stick acts as an interface between the material and the base, achieving great adhesion.

Although it has been developed to facilitate the printing of the Polypropylene filament, Smart Stick is also a valid fixer for the majority of market filaments such as ABS,HiPS,PLA,PETG,Nylonstrong, etc.

In addition, due to its packaging, it is very easy to use, unlike polypropylene tape, which is more complex to apply due to the need to use a spatula to apply it without leaving air bubbles that would leave the final piece marked.

The usage advice tab shows how to use and apply the 3D Smart Stick adhesive.

Apply Smart Stick, the adhesive liquid very simple. The main steps to take into account are the following: