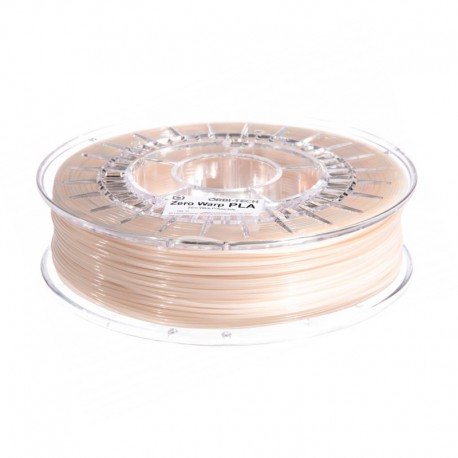 Warping effect (contraction) is that especially in large pieces are usually off the corners of the bed parts print due to contraction of the printed material itself due to the plastic exits the extruder at a high temperature and when cooling (after leaving the extruder) shrinks and make this problematic effect. That is why in all the plastic filaments always be to use warm bed (at different temperatures) to temperature change abrupt least possible. This problematic effect is minimized to the maximum with the help of the Magigoo, BuildTak, 3Dlac or Kapton Tape.

Although the standard PLA is one of the materials has less warping effect is always susceptible to this effect appears, especially in large pieces. So it is always advisable to print with a base temperature of 50 ° C, but can be printed with the base at room temperature without problems using or 3DLac Blue Tape.

In terms of flexibility PLA-ZERO WARP is a hard material such as ABS but slightly more flexible than the standard PLA. This is a material of high strength and stiffness.

Then in the next picture you can see a comparison between the ABS, standard PLA and ZERO WARP PLA (PLA-45):

If you need to print very thin and tall pieces, you will see that the PLA plastic does not give you enough time to harden each layer, so that the piece will be as if it had melted. To solve this problem we give a very simple advice, printed at the same time at least 2 pieces, and place them in separate base. Thus while the extruder is moved from one piece to another, the plastic has time to harden each layer in achieving a better result. It is always advisable to use Magigoo, BuildTak, Blue Tape or 3DLac.

It is also advisable to set the "raft" which is to create a first thick layer, and supports that will not suffer that contraction and on which is printed the piece. The disadvantage of using the "raft" is that this first layer will have a less smooth. It is advisable to lower the density of "infill" parameter for the part to store less heat. As for the "brim" (the membrane that is created around the part) parameter is recommended never fit in greater thicknesses of 5mm to help the first layer does not come off. As for the interior temperature where printed is recommended to be controlled and no drafts.