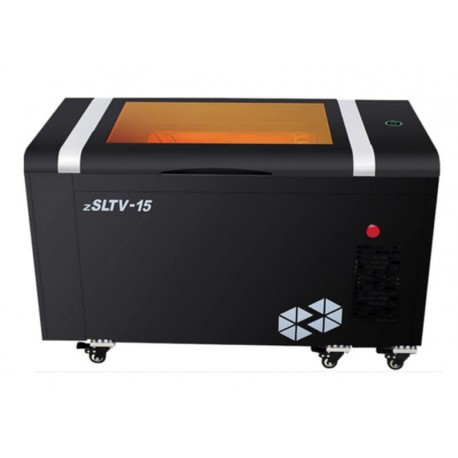 UniZ has two industrial LED-LCD 3D printers that enhance and improve the productivity of professional users, such as technicians who help us create large prototypes, functional parts or high volume final products with a good surface finish:

As an evolution of the use of an LCD screen, UniZ has obtained UDP (Uni-Directional Peel) technology, with which a really high printing speed (600 mm/h) is achieved. The zSLTV 15 manufactures the parts continuously, the printing base does not perform the typical back and forth movement of the resin printers, if not, the base ascends constantly. This coupled with its incredible volume of printing (345.6 x 194.4 x 400 mm), make this 3D resin printer is the tool desired by all professional users. The UDP technology must always be accompanied by the resins with UDP denomination to ensure an exceptional surface finish and resolution.

The zSLTV 23 is the 3D printer that UniZ has created for professional users who want to manufacture functional objects or reproduce their prototypes at scales close to the actual size thanks to its large manufacturing area. With a print volume of 527 x 296.46 x 740 mm and a resolution in the XY plane of 137 μm, this 3D resin printer is the manufacturing tool that every designer and artist wants to have in their workplace to make prototypes, tools , final pieces and an infinity of other elements regardless of the size of the piece but always maintaining a good surface finish.

UniZ 3D LCD printers are ideal for professionals users who want to make parts, models and prototypes without worrying about the size and a wide variety of materials and colors. The users who acquire one of these printers will enjoy its use thanks to the ease of handling of the rolling software, of the 3D LED-LCD printer itself and of aids such as the assistant of automatic transfer of the resin from the tank to the bottle and of the self-filling during the manufacture of a piece.