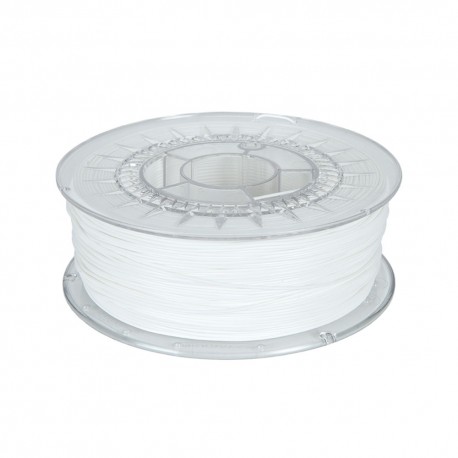 The PLA Basic white filament is made of PLA INGEO 3D850 without the incorporation of recovered material. Thus, PLA Basic white is a material with high resolution, rigidity, and low shrinkage. It has a higher hot melt index than other PLAs and excellent adhesion to printing surfaces, a feature that optimizes the quality of the first layer and minimizes the risk of warping or deformation.

In addition to all the properties conferred by the PLA Ingeo 3D850, PLA Basic white stands out from other PLA filaments for its great value for money; offering very good results at an affordable and competitive price.

It should be noted that PLA Basic white is a hygroscopic material, which means that it absorbs moisture from the air. This can cause a decrease in print quality. To keep the filament free of moisture, it is recommended to store the spools in vacuum containers such as those from PrintDry or use a PrintDry II filament dryer.

More information for optimal results can be found in the usage tips tab using PLA Basic white filament in your 3D printer.