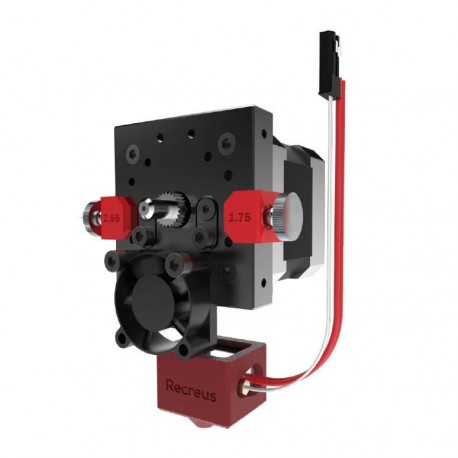 The Recreus Extruder V3 offers the best properties for 3D printing of flexible materials (Filaflex TPE, Flexfill TPU, PLA Soft...) but is compatible with most rigid materials (PLA, ABS, PETG, Nylons...). This extruder is the creation of Recreus, a company known worldwide thanks to its incredible flexible and elastic materials, available in a wide range of colors called Filaflex. Recreus has been developing this extruder for more than a year, based on its extensive knowledge in flexible filaments and the feedback it receives from its customers, thus achieving the most powerful extruder for elastic filaments on the market.

Below, we cite the keys that make the Recreus Extruder V3 one of the most powerful in the market:

As any user of a 3D printer knows, the best way to print with flexible materials is with a direct extruder, but this system causes many inertias in the shaft that moves the extruder, because of the weight of the extruder itself. To reduce the inertias to the maximum, Recreus has designed the operating base of the extruder in a single block of aluminum. This block contains all the parts of the extruder, which at the same time serves as the basis for the extruder motor and as a fan base for the HotEnd, with only a weight of 150gr. Thanks to this, the Recreus Extruder V3 has very little inertia when it comes to 3D printing, even at high speeds.

The Recreus Extruder V3 includes two HotEnds, one for 1.75mm filament and another for 2.85mm filament, giving the opportunity to use any of the two diameters in the same extruder. When using very elastic materials, such as the Filaflex UltraSoft 70A, it's advisable to use the filament with a diameter of 2.85mm, the reliability and quality of the printing is greatly increased. When printing medium-sized prints with moderate printing speeds and conventional materials (PLA, ABS, PETG...) usually used filament with a diameter of 1.75mm. With this extruder can print with any of the two diameters performing a simple exchange operation of the HotEnd, which is done in 5 minutes.

The HotEnd is the main part of all 3D printers that affects when making quality parts, with agility and without jams. For these reasons, Recreus has designed its own HotEnd, which stands out for being short and reliable.

Thanks to its short length, the distance between the extruder motor pinion and the nozzle tip is reduced, reducing the compression length of the elastic filament and the hysteresis as much as possible, resulting in greater thrust and extrusion control. Such a short HotEnd produces less inertias between the tip of the nozzle and the HotEnd-extruder junction, being null at low printing speeds.

As shown in the image, Recreus has redesigned the HotEnd sink, reducing its section to only 0.50mm thick. Since the HotEnd has little mass (increases the heat dissipation capacity) and the base of the extruder is also metallic, you only need a small fan to dissipate all the excess heat.

To increase the versatility of mounting on virtually all 3D printers on the market, the extruder block has many threaded holes. In addition, the Recreus Extruder V3 includes an L-shaped support that increases the possibilities of assembly to almost all 3D printers on the market and even in various positions. To check if the 3D printer is compatible with this support, in the download section the sketch with all the dimensions of the holes is available.

With all this there's no doubt that the Recreus Extruder V3 is the perfect extruder for 3D printing with flexible and elastic filaments, as well as the rest of common filaments.

It isn't recommended to use abrasive materials with this extruder.

It's recommended to watch the following videos before assembling the extruder: