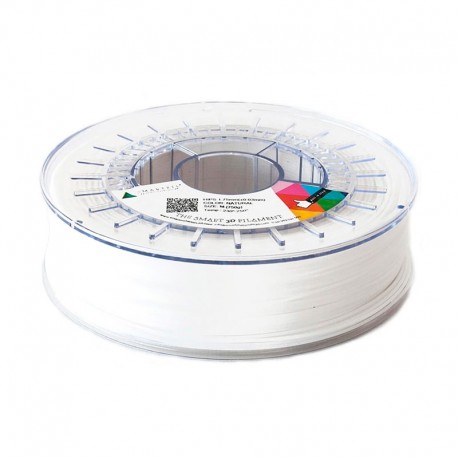 Although most of its mechanical and physical properties (stiffness, tensile strength and impact resistance, thermal stability, ...) are similar to those of ABS, there is a feature that makes it different to everyone else which is its solubility in D -Limonene, allowing to make unworkable forms a soluble support material and will be realized once the piece in D-Limonene and HIPS immerse disappears, leaving the piece without any support material with a high surface quality.

It is indicated for light and high-quality technical parts (Due to the high resolution printing) material. Smartfil HiPS filament (Polystyrene) is a bit lighter than the ABS. The temperature optimum print is 240 °C. When printed at this temperature it is necessary that the temperature of 80-100 ºC bed is to minimize the warping effect.

Besides the Smartfil HiPS filament has a very good seal so it is ideal for containing liquids without leakage. This property is due to the high thermal inertia of  own Smartfil HiPS which enables a very good adhesion between layers print.

Smartfil HiPS filament (Polystyrene) is resistant to oils, fats and alkalis but not fuel. As for his post-processing and finishing it can be chrome, paint, glue and sand. HIPS supports evil UV rays, so you long exposure to the sun it discolor and become brittle. If you need a material that resists well UV light rays you must choose the ASA filament. HIPS (Polystyrene) has low electrical conductivity, which can be used as an electrical insulator. Its properties typically used in high-frequency. As for the softening temperature HIPS it supports up to 96 °C.

It´s a material with properties very similar to those of ABS that printing is not especially difficult to print. Nozzle temperature should be between 230 and 240 °C. As in the case of ABS, the need to use a hot bed at a temperature of about 80-100 °C. Once the printing must wait for the piece cool before removing to prevent any deformation may occur due to the printing temperature. It is also advisable to use BuildTak or Dimafix to prevent warping effect on printing.

5 other products in the same category: