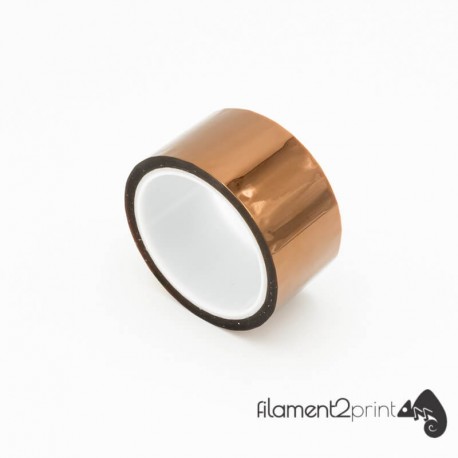 Kapton Tape is used to reduce the warping effect 3D printing or thermal and electrical insulation. Also it is known as polyamide tape. In 3D printing is used as printing surface for those filaments that require high temperatures print base bed (ABS, HIPS, PC, etc which require a temperature of bed 80 to 130 °C) because the Kapton Tape resists high temperatures and provides high adhesion between the base and the printed piece.

One of the great advantages is that in the event that the part is strongly adhere to the base, removing the piece Kapton tape itself is also retire without damaging the base with sharp spatulas of 3D printer. (Case commonly produced using lacquers standards).

For large parts that can be susceptible to warping or material effect with high internal forces (Taulman Tritan-BluPrint, Nylons, PC, etc) can be applied on the itself Kapton Tape with layer 3DLac which will help increase the adhesion between base part and thus eliminate the warping effect.

It is also used for mounting 3D printers for isolation of some components thereof.

This Kapton Tape has a great capacity to stick to the printer dock which is necessary to ensure good print quality, but it can become a minor inconvenience at the time of having to place the Kapton Tape on the base since this can creating fold wrinkles or air bubbles after spoil your 3D printed parts. To avoid this we recommend you follow these steps:

15 other products in the same category: