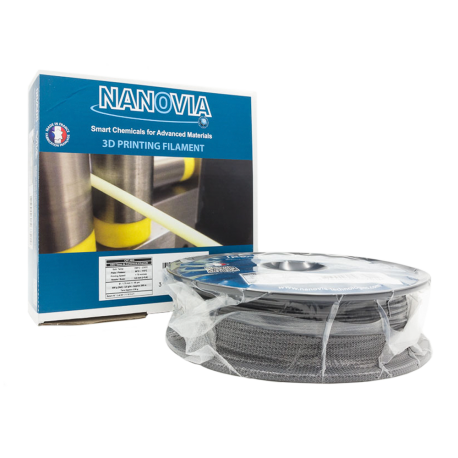 ABS is one of the most widely used materials for 3D printing and is used to make parts and elements that we use on a daily basis (car fenders and headlights, electrical connection boxes, containers, etc.). That is why it isn't surprising that manufacturers develop new materials from ABS. ABS CAF is an Acrylonitrile Butadiene Styrene reinforced with carbon and aramid fibers to improve the general mechanical properties of the plastic base.

The Nanovia ABS CAF stands out from the rest of the market by a size of aramid fiber and carbon optimized for 3D FDM printing. This distribution of the fibers frees the 3D printer's extruder from jamming, but it's still recommended to use a nozzle larger than 0.4mm, as in many other filaments with high quality fibers (XSTRAND GF30-PP, XSTRAND GF30-PA6, Timberfill Light Wood Tone, Timberfill Rosewood, Timberfill Champagne, Timberfill Cinnamon, Smartfil E.P. and etc). Both the distribution and the amount of fibers (carbon and aramid) have been carefully studied and developed by the Nanovia technicians until they reach an advanced behavior filament. Thanks to all of the above, ABS CAF presents a lower fragility compared to many thermoplastics reinforced 100% with carbon.

A common problem that occurs when using ABS is the dimensional stability, especially when it comes to being in an environment with temperatures close to the softening point. The introduction of the aramid fiber decreases the deformation and increases the resistance to impacts by absorbing and dissipating the energy produced by the blows. This quality is maintained up to high temperature values. Aramid fibers also convert ABS CAF into a filament with low flammability (Tª Flammability > 500ºC). The temperature of flammability is the temperature at which a substance begins to burn, that is, when a flame appears but a piece made of ABS CAF deforms at a much lower temperature. This material is a safe bet for parts that are located in environments with high temperatures such as car engine compartments.

On the other hand, the development of this filament has also managed to obtain a light material with high values of mechanical strength (Module of traction: 2300 MPa), 20% higher than a standard ABS. Compared to ABS CF it has lower values of tensile and flexural strength, lower thermal conduction power, more sensitive to UV rays and humidity, but it counteracts it with: greater resistance to friction, greater resistance to brittle breakage and it's resistant to all organic solvents (methanol, ethanol, acetone, chloroform, toluene, etc).

Nanovia ABS CAF is an ideal material to replace parts of ABS that need to withstand higher mechanical stresses, higher temperature values, be resistant to impacts and friction. In addition, ABS CAF is compatible with most 3D printers FDM on the market.

3D printing with ABS filament is a bit more complex than with the PLA filament. In the case of the ABS CAF filament, it's necessary that the printing base is hot, between 90 and 110ºC. In addition, the temperature of the extruder should be between 250 and 270ºC. It should also be remembered that ABS plastic undergoes the phenomenon called "warping", which causes the first layer of the pieces to detach from the base of the 3D printer. So if you are going to print large pieces it's advisable that you use BuildTak, Kapton Tape, Magigoo or DimaFix so that the pieces don't tend to detach from the base. To ensure the dimensional stability of the parts it's advisable to use a closed 3D printer.

With ABS CAF it isn't necessary to use reinforced nozzle since this filament has low abrasion. Even so it is recommended to use the Olsson Ruby Nozzle for all advanted materials.