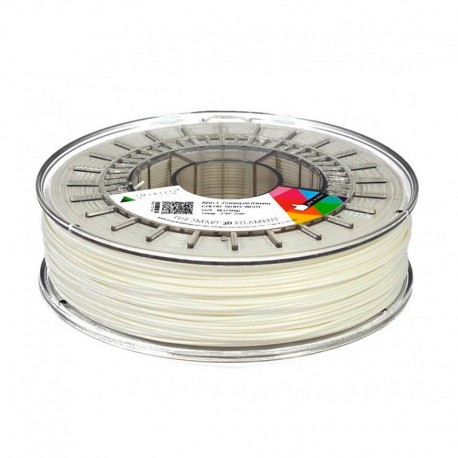 This ABS plastic is used in some of everyday objects, such as most plastic boxes, toys or housings many electronic devices. Another important feature of White Smartfil ABS filament (1.75mm or 2,85mm) is having the ability to absorb water. So if you want to do any container that will contain water, may not be the most suitable material. Unlike the PLA, it is not biodegradable and one of the weaknesses of the ABS is suffering with exposure to UV rays, so that the ASA has emerged as an evolution of ABS materials to alleviate this weakness of ABS.

The optimum temperature for extrusion White Smartfil ABS filament (1.75mm or 2,85mm) is around 240 °C, slightly higher than the PLA Smartfil. In the tab usage tips you will find more interesting information to get the best results using this White Smartfil ABS filament on your 3D printer. The ABS is a polymer composed of three blocks, acrylonitrile, butadiene and styrene by what is called terpolymer. Each of the three blocks provides different characteristics. The acrylonitrile rigidity resistance to chemical attack, toughness and high temperature stability. Butadiene, temperature toughness when it is particularly low, and resistance to impact; and styrene, mechanical strength, stiffness, brightness, hardness. If you are interested in learning more about this material can read more on the link.

The White Smartfil ABS filament (1.75mm or 2,85mm)  can be machined, grinding, sanding, boring, paint and glue with extreme ease, maintaining a really good finish. In addition, it is extremely durable and has some flexibility. If you want to achieve extraordinary surface finishes using the coating specifically designed for 3D printing you can find in the accessories category called XTC-3D. ABS is soluble in acetone so many users perform 3D printing vapor bath of acetone to obtain smooth and shiny surface finishes. It is advisable for a proper bed cover 3D printer with Kapton Tape, BuildTak,DimaFix or with 3DLac  you can find in print accessories store.

3D printing with filament ABS is a bit more complex than the PLA filament. In the case of Smartfil ABS filament is necessary that the print base is hot about 60 °C, unlike other ABS standards on which this temperature should be between 80 and 110 ºC, so printing ABS Smartfil is really easier. In addition, the extruder temperature should be around 240 °C depending on the color used. Also worth remembering that the ABS plastic undergoes the phenomenon called "warping" which causes the first layer of the pieces off the base of the 3D printer. So if you are printing large pieces it is advisable to use BuildTak, Kapton Tape, DimaFix or 3DLac so that the pieces do not tend to detach from the base.