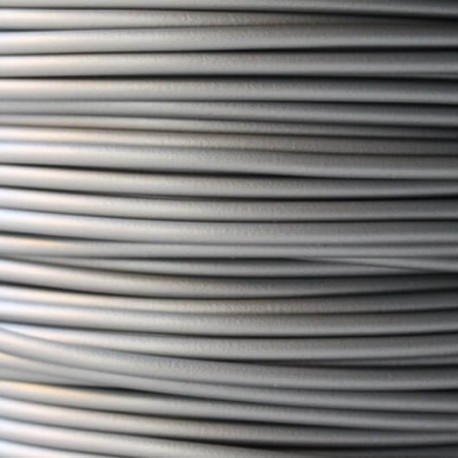 ABS Basic Silver Filament is a 3D printing filament made in Europe. The main characteristics of this material are its resistance, toughness and opacity. ABS Basic Silver is available in 1 Kg spools and in diameters of 1.75 mm and 2. 85 mm; formats compatible with a large number of 3D FDM printers on the market. ABS Basic Silver stands out from other filaments of the same material for its great value for money; offering very good results at an affordable and competitive price.

3D printing with ABS Basic Silver filament has some complexity compared to other materials. The optimal extrusion temperature for ABS Basic Silver is around 230ºC, slightly higher than PLA. ABS Basic Silver requires the use of a heated bed, which must be between 90 ºC and 120 ºC. It's also recommended to cover the printer bed with Kapton Tape, BuildTak, DimaFix, Magigoo or with 3DLac to achieve a good adhesion of the first layer and thus avoid possible deformations such as Warping.

It should be noted that ABS Basic Silver is a hygroscopic material, which means that it absorbs moisture from the air. This can cause a decrease in print quality. To keep the filament free of moisture, it's recommended to store the spools in vacuum containers such as those from PrintDry or use a PrintDry II filament dryer.

In the usage tips tab you will find more interesting information to get the best results using this ABS Basic Silver filament in your 3D printer.

14 other products in the same category: