Many users of 3D printers need to complement their production with different machines to cover their entire market and offer a service that stands out from the rest. One of those machines is the laser cutter, a tool that complements the work that can be done by a 3D printer, with which you can cut and burn a large amount of materials.

The conventional laser cutter is usually a machine for industrial use, with a high price and complex software that makes it difficult to use for personnel who are not specialised in this type of machinery.

Mr Beam has gone on to develop upgrades to this equipment, leading up to the launch of Mr Beam II Dreamcut [s], its most advanced machine. 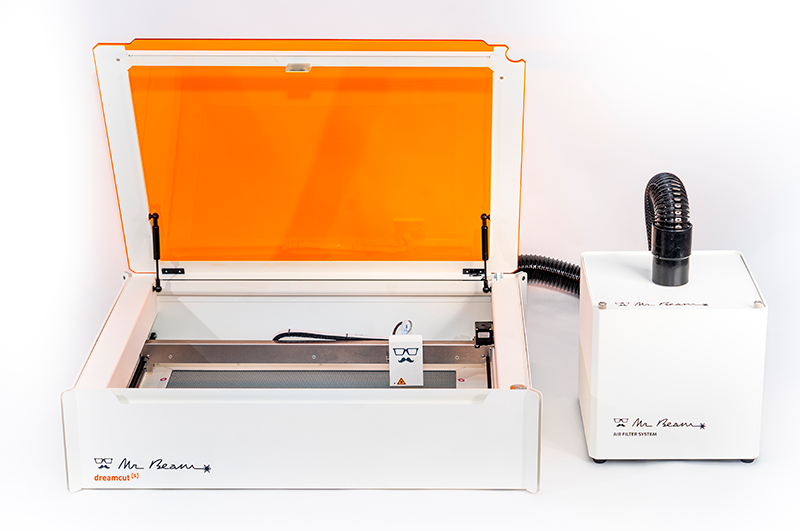 Versatility and ease of use

The Mr Beam II Dreamcut [s] laser cutter is delivered practically ready to use, only the laser head and the air filter system need to be connected. It is therefore considered plug and play.

One of the advantages of the Mr Beam II laser cutter is that the designs or shapes to be cut or engraved can be made using any program or application. Once the design is finished, it must be exported with one of the following extensions: dxf, svg, g, gcode, gif, jpe, jpg, jpeg, bmp, nc, pcx, png and webp.

After exporting the file, it has to be uploaded to the web application "Mr Beam Laser bench". Thanks to the integrated WLAN of the Mr Beam II laser cutting machine, the connection to the machine is fast and uninterrupted from any location.

To make the Mr Beam II Dreamcut [s] laser cutter even easier to use, a camera is integrated into the safety cover, which makes it easier to align the design to be cut or engraved with respect to the sheet material.

When the lid is open, the camera takes a picture of the work surface every few seconds and transmits the image directly to the web application, which allows the position and size of the design to be adjusted directly, a first for this type of machine. This also makes it possible to precisely engrave the desired area or to make the best possible use of the material to be cut, thus avoiding pieces of material that cannot be reused. Compatibility with a wide variety of materials

The Mr Beam II Dreamcut [s] laser cutter has been tested (cutting and engraving) with more than 15 different materials with fantastic results. It must be taken into account that each material behaves in a particular way in front of the laser, which makes it necessary to vary the configuration. One of the advantages of the Mr Beam II Dreamcut [s] laser cutter is that it makes a backup copy of the material configuration defined by the user. In this way no materials are overwritten and no information is lost.

The following table shows the main materials that can be used with this laser cutter and whether it is possible to cut and engrave them: In addition, users who have a Mr Beam II Dreamcut laser cutting and engraving machine can upgrade their machines by installing this head, which can be purchased separately. In this way, users of the previous version of Mr Beam II Dreamcut [s] can enjoy the power and speed offered by this new laser.

Inevitably, while the Mr Beam II Dreamcut [s] is cutting and recording, smoke is produced. For this reason it is recommended to purchase the air filtration system, which keeps the air inside the space where the cutter is located clean, odour and smoke free. The air filtration system has a combined HEPA and activated carbon filter inside, which eliminates all possible odours and harmful particles generated during the cutting or laser engraving process. This type of filter is also widely used in industrial 3D printers, where parts are made with advanced materials that release fumes and odours that are harmful to people. A hose is supplied with each laser cutter that connects directly to the filter system. Although not recommended, the Mr Beam II Dreamcut [s] can be used indoors without the air filtration system by placing the smoke exhaust hose in an open window.

The Mr Beam II Dreamcut [s] is a laser cutting and engraving machine ideal for people working in the industrial sector (architects, designers or engineers), users who make models, artistic pieces or final products, or educational centres where, thanks to the features and safety offered by this equipment, students can carry out various projects encouraging their creativity.

All doubts that may arise during the use of this laser cutter are resolved in this link.

21 other products in the same category: