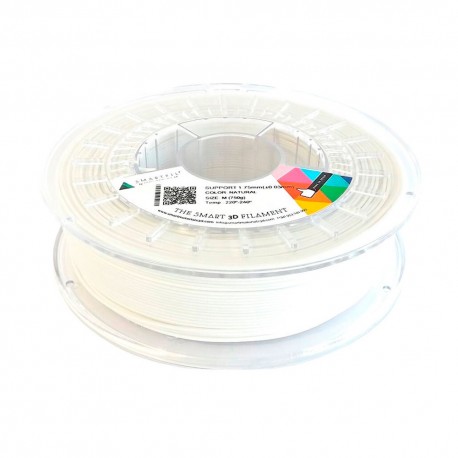 Include its temperature slightly lower than any normal filament HIPS (220-240ºC) and its lower temperature printing required in the hot bed (50-100 ºC). Like all HIPS filaments has a high print resolution.

HIPS filaments have affinity with ABS, HIPS hence be used as support ABS parts. And however the PVA is used as support parts PLA. This is because the thermal affinity between materials. Well, the HIPS Smartfil SUPPORT (1.75mm or 2.85mm) supports more material than is normal HIPS, so it is ideal for use with most 3D printing materials as support material.

By way of comparison with the other two materials used as support material / support are used today (PVA and HIPS Normal):

The main advantages of HIPS Smartfil SUPPORT filament with respect to PVA are its lower cost, greater compatibility with different materials (not just PLA) and is not affected by moisture so it does not lose its properties.

As for the main advantages of the filament HIPS SUPPORT Smartfil  with Normal HIPS  it is dissolving 3 times faster in D-Limonene, which no warping effect, which is compatible with a wider range of materials (not only ABS) and you can print faster with the same print resolution.