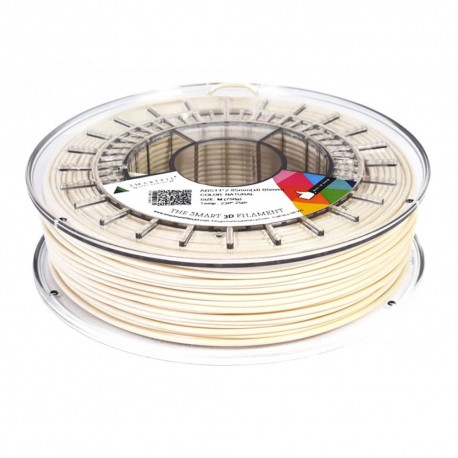 Fireproof ABS filament is a fireproof material tested according to UL94 and IEC 60695-11-10. It is ideal for coating elements that may pose a fire source material.

All typical plastics have low flame resistance, hence arose the ABS Smartfil FIREPROOF which is a flame retardant or self-extinguishing in order to provide high levels of security in the environments of both daily life or work as technical parts. FIREPROOF ABS is an additive ABS to delay the spread of fire and extinguishing finish without producing plastic drip.

Underwriters Laboratories (UL) is an independent organization that provides testing and product safety testing and certification. His UL94 test and qualification procedures for determining the flammability of thermoplastic are generally accepted standard in virtually everyone.

This test measures the burning time of a sample of polymer fixed vertically (the thickness specified in the test) after they have made contact with the flame of a Bunsen burner for 10 seconds. The V0, V1 and V2 tests determine the degree of self-extinguishing polymer.

Therefore, the ABS FIREPROOF is ideal for coatings or covers to protect such electrical circuits or any risk of generating element fires.

In short, this FIREPROOF ABS filament can be eligible for the highest category of self-extinguishing according to UL94 as long as the thicknesses are more than 2.1mm.

In addition the ABS FIREPROOF is additive to reduce the effect warping and cracking. The warping effect occurs due to the shrinkage of the plastic as it cools affecting the first layer of the piece off of the printer dock. cracking and warping effect is similar to but in the intermediate layers.

3D printing with filament ABS FIREPROOF is a bit more complex than the PLA filament. In the case of ABS FIREPROOF filament is necessary that the print base is hot between 80 and 100 ºC, so printing ABS Smartfil is really easier. Also worth remembering that the ABS plastic undergoes the phenomenon called "warping" which causes the first layer of the pieces off the base of the 3D printer. So if you are printing large pieces it is advisable to use Magigoo, BuildTak, Kapton Tape, DimaFix or 3DLac so that the pieces do not tend to detach from the base.

If you need to print very thin and tall pieces, you'll notice that the ABS FIREPROOF plastic doesn´t give you enough time to harden in each recording layer and therefore the piece is as if it had melted. To solve this problem we give a very simple advice, it prints at the same time at least two pieces, and place them separate at the base. Thus while the extruder is moved from one room to another in each recording layer, the plastic will have enough time to harden getting a much better result. As for the interior temperature where printed it is recommended to be controlled and no drafts. Finally remember to use your 3D printer in a well ventilated room as the fumes released during printing filament ABS are not entirely healthy.