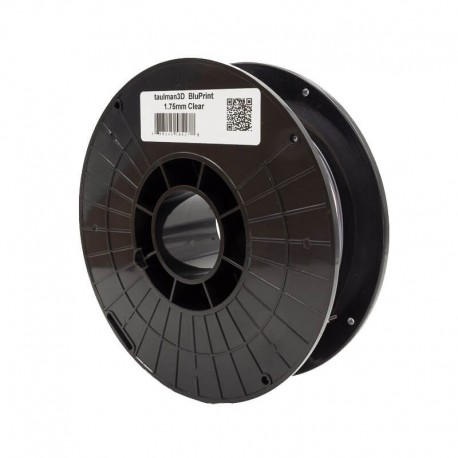 Taulman Tritan (also called BluPrint) is a new material of high resistance to the traction that at the moment is considered the most resistant and strong of all the market of 3D filaments.

It presents a minimum deformation. Taulman Tritan BluPrint is a polyester approved by the FDA (Food and Drug Administration), that leaves a finishing like the transparent glass. Has some properties of union, mainly the excellent adherence between layers that do that the pieces created with Tritan are impossible of splinter. It is extremely difficult that Taulman Tritan break along the layers of the printed piece. Taulman Tritan-BluPrint is the most used material to realise pieces in engineering that require to bear high efforts to traction, therefore it is considered the material by excellence in the engineering.

The mechanical properties of the Tritan compete directly with the and the polycarbonates. Definitely we are in front of a truly exceptional material for applications really demanding.

The temperature range recommended by the American manufacturer is between 275 and 285 ° C. This temperature is inaccessible to many 3D printers, as most 3D FDM / FFF printers usually reach up to the real 250  ºC. As the temperature of the bed base is imperative to 85-90 °C is accompanied by the film anti-warping BuildTak or Magigoo.

Taulman Tritan-BluPrint  filament is a filament with many internal forces causing it a bit complicated to print the first few times until you get detect optimal parameters for each 3D printer.

Moreover, it is not advisable to leave in the extruder the filament Taulman Tritan-BluPrint to high temperatures for more than 5 hours without printing, since it could return dark and lose their properties.