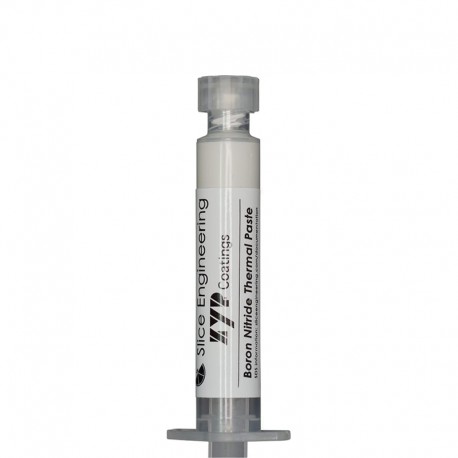 One of the most important factors for the correct functioning of the hotend is that its thermal performance is optimal.

A low thermal conductivity between the heat break and the heatsink can cause the heat transfer between both components to be lower than between the heating block and the heat break. This causes an overheating of the cold zone resulting in clogging and inconsistent extrusion as well as the dreaded "heat creep" effect, where the filament melts inside the heat break causing a clogging that is difficult to solve. This phenomenon is especially common when PLA is combined with an all-metal hot end that has inadequate thermal performance.

This is why it is essential to apply thermal paste between the heat break and the heatsink, to favour heat transmission and keep the cold zone of the hot end properly cooled.

Although it is common to use computer thermal paste, this has some drawbacks. On the one hand, it is optimized for the working temperatures of CPUs or GPUs, which are usually between 60ºC and 90ºC, lower than those that can be reached in a hotend, especially when using high temperature materials.

On the other hand, the high temperatures reached in the hotend cause the thermal paste to dry quite quickly, which usually causes the heat break to stick to the heatsink, making it difficult to separate it for a new application. In addition, the higher performance computer thermal pastes usually have a thermal conductivity below 10 W/mK.

Slice Engineering, a manufacturer renowned for its high performance Mosquito and Copperhead hotends, has developed an innovative product to match its hotends.

It is a thermal paste based on boron nitride, a crystalline refractory compound with a low packing factor that gives it a high thermal conductivity.

Another important difference is its excellent resistance to high temperatures. While in traditional thermal pastes it is not recommended to use them above 150 ºC - 180 ºC, Slice Engineering's thermal boron nitride paste is able to withstand working temperatures of up to 1000 ºC.

In addition, boron nitride has a high lubricity, which facilitates the separation of components for cleaning.

All these properties mean that this thermal paste has, in addition to improving heat transfer between the heat brek and the heatsink, other applications that help to obtain the best performance from the hotend.

On the one hand, its high lubricity and thermal resistance up to 1000 ºC, makes it possible to use it as a lubricant between the nozzle and the heat block, facilitating changes and improving heat transfer between both components.

On the other hand, as it is not electrically conductive, it can also be applied between the thermistor and the heating block and between the heating cartridge and the block, thus favouring heat transfer and providing more precise heating and greater thermal stability.

Boron nitride thermal paste is undoubtedly one of the most efficient and versatile thermal pastes available today and the recommended choice for high performance hotends.

Thermal boron nitride paste should only be applied in areas where good thermal conductivity is required. It can be applied in the following areas of the hotend:

Never apply in the contact zone between the heating block and the heat break.