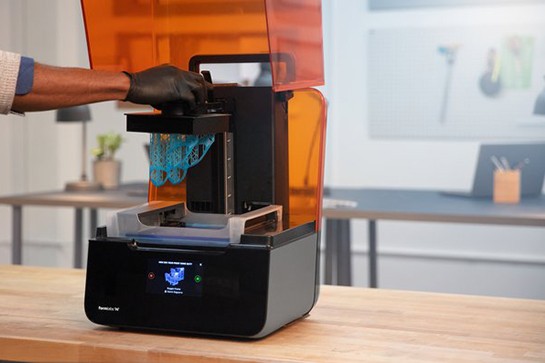 3D printing of light-curable resins has been gaining ground in recent years to become the second most popular 3D printing technology after FFF, both in professional and maker environments. This boom has been the result of two important factors. On the one hand, the lower cost of resin 3D printers due to the emergence of new technologies has placed resin printers in the same price segment as FFF. On the other hand, the emergence of new materials such as dental, flexible and engineering resins has made it possible to produce resin parts that were previously only viable using FDM or SLS.

The main strength of 3D resin printing, which has attracted the attention of some professional sectors such as dentistry or jewellery, is the high resolution it is capable of achieving, ranging from 50 µm to 150 µm in XY and from 30 µm to 200 µm in Z, which is below the minimum resolution of a 3D FFF printer. As a result, resin printed parts have a high surface quality and a high level of detail, giving them the highest aesthetic quality of all additive manufacturing technologies.

3D resin printing is based on a completely different principle to that used in most 3D printing technologies such as FFF or SLS. Whereas in these, a thermoplastic polymer is used as the starting point and heated to the melting temperature to form the part, resin printing is based on polymerising a reactive mixture of monomers and oligomers by selective application of light. This means that, instead of using plastic as a raw material, in resin printing the basic components that make up the plastic are used and the plastic is formed by chemical reaction during the printing process.

Resins for 3D printing are mainly made up of three components:

Monomers and oligomers: These are small molecules that react with each other to form long polymer chains, which are the fundamental component of plastic. The length of these chains will largely determine their properties

Cross-linking agent: Consists of larger or smaller molecules with two or more reactive groups capable of binding at various points to the polymer chains. Its function is to keep the chains firmly connected to each other. In general, plastics formed in the presence of crosslinking agents give rise to what are known as thermosetting plastics or resins.

Photoinitiator: This is responsible for promoting the reaction between the monomers or of these with the crosslinking agent. These are organic molecules, generally dyes or fluorophores, capable of producing cations or free radicals in the presence of light at a given wavelength, thus initiating radical or cationic polymerisation reactions.

Light, generally blue (405 nm) or violet (365 nm - 385 nm), is used to activate the photoinitiators and make the resin solidify, as this is the most energetic band in the visible spectrum. To do this, only the areas that will be part of the piece are illuminated in each layer. 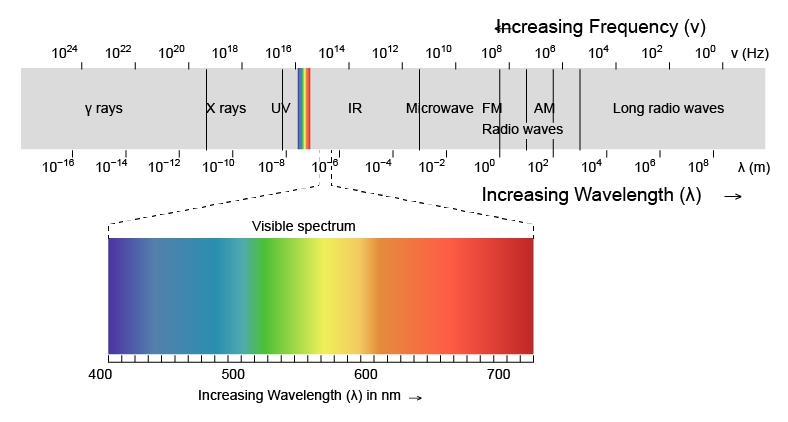 The 3D resin printing technologies are determined by the type of light source and the method of selective lighting used. Currently there are three common technologies: SLA, DLP and LED-LCD.

3D SLA or stereolithography printing is the oldest commercial 3D printing technology. It was developed during the first half of the 1980s and was patented in 1986 by 3D Systems founder Chuck Hull, just three years before Stratasys founder Scott Crump patented FDM technology.

In 3D SLA printing, the resin is cured using a laser beam between 150 and 300 µm in diameter. The laser sweeps the surface of each layer using a moving mirror system called a galvanometer. The main advantage of this technology is the high precision it can achieve, especially in the central area of the construction platform, which is only surpassed by SLS technology.

Another of its advantages, derived in part from this high precision, is that it achieves a superior surface finish to that obtained in DLP and LED-LCDs as it does not present the staircase effect that can be seen in the latter. 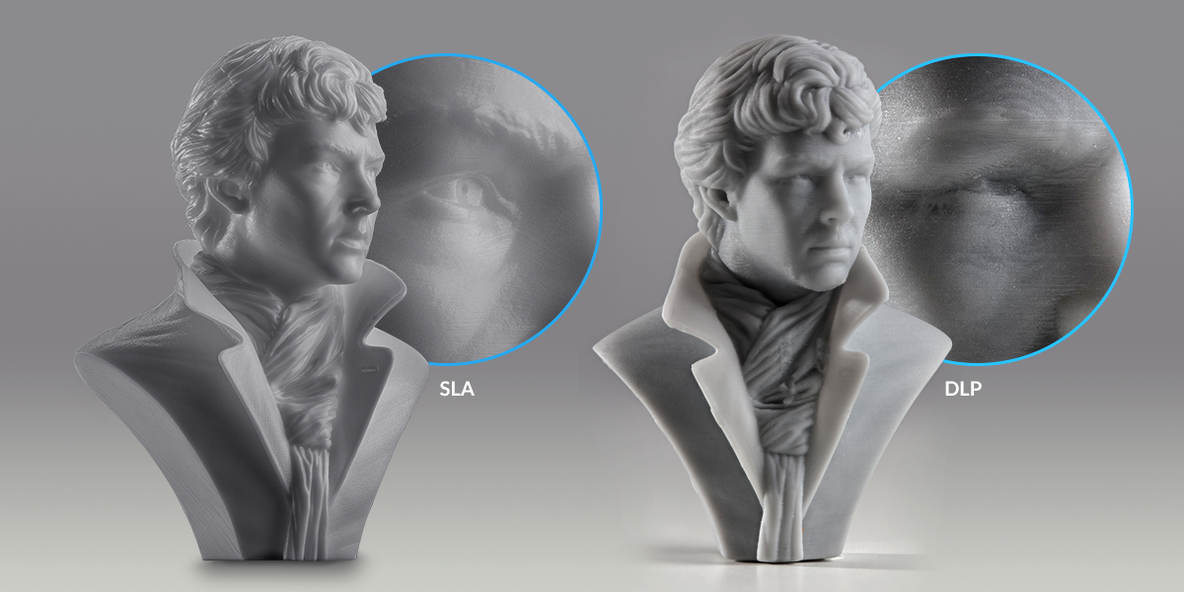 However, not everything is an advantage, as this is the slowest resin printing technology. For each layer it is necessary to sweep the entire surface of the part with the laser, which is a slow process, which increases the more parts we position in the construction space. In addition, it is necessary to keep the sweeping speeds within a specific range, as very high speeds would result in a loss of precision, the main strength of this technology.

This is the technology used by the renowned Formlabs printers, the benchmark brand for resin printing. Printers such as Form 3 or Form 3B use this technology in conjunction with high precision galvanometers to offer the highest quality standards in critical sectors such as high jewellery, dentistry or medicine.

DLP 3D printing technology was developed with the aim of reducing 3D resin printing times. Instead of sweeping the surface of the part with a laser, the entire layer is projected simultaneously using a light source, a device consisting of a moving micro-mirror array known as a DMD (Digital Micromirror Device) and a set of lenses responsible for projecting the image onto the resin.

This technology was a revolution, since each layer is formed in a few seconds and the printing time is independent of the number of pieces placed on the base, only of the height of these.

Its main disadvantage is that the printing resolution is determined by the density of micro-mirrors that form the DMD and the projected surface. For the same DMD system, a larger printing surface will always result in a proportional decrease in resolution, which is not the case with SLA systems, where the resolution is determined by the diameter of the laser beam and is independent of the printing surface.

In addition, the use of projection lenses can cause distortions in areas far from the centre, which are greater the larger the construction size. It is possible to correct these distortions by using more complex optical systems, however, they often make the device very expensive and therefore not very popular.

The surface quality of the pieces is usually slightly lower than those produced by SLA, and in many cases the staircase effect appears.

Image 5: Staircase effect derived from the use of square voxels in DLP Source: theorthocosmos.com

Although printing times were critically shortened, this technology did not displace SLA technology. Today, it is a technology that has fallen into disuse, displaced mainly by the appearance of LED-LCD technology.

It is the latest technology to reach the market and has experienced significant growth in recent years. It was developed as an evolution of DLP technology, and today has virtually replaced it.

Operation is similar to DLP technology, however, instead of reflecting light using a digital micromirror device (DMD), it uses an LCD device in which each pixel acts as a small window that blocks or lets light through.

LCD devices are the same as those used in mobile screens or TV or computer panels, so the cost is much lower than that of DMD devices. In addition, they are available in sizes from 3" to 80", so the projection is direct and perpendicular to the base over the entire surface. This avoids the use of expensive and complex projection lens systems and the distortions they cause in DLP produced parts.

Among its main advantages are its high printing speed and low cost. In addition, it outperforms DLP technology in two key ways. As noted above, perpendicular projection prevents distortion from the oblique projection provided by lenses in DLP systems. Secondly, LCD devices not only block or allow light to pass through, but can also filter it by varying the light intensity independently at each pixel. This makes it possible to use anti-aliasing processes that reduce the staircase effect and allow for surface qualities very close to those obtained by SLA 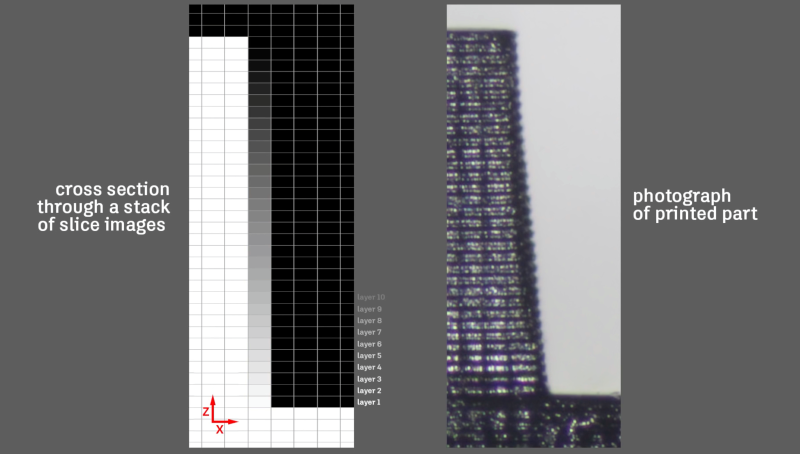 One of the main drawbacks is the high level of heating produced by the LED matrixes used, which means that effective cooling systems must be implemented to prevent the resin from heating up in long prints. 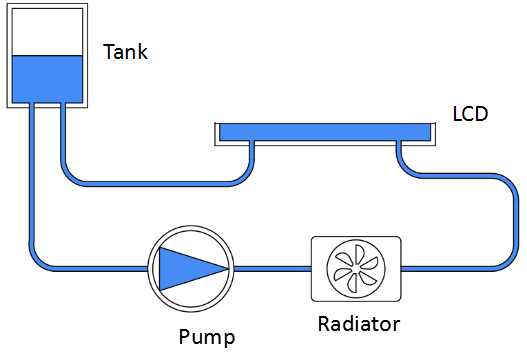 It is the technology present in all low-cost resin 3D printers and also the latest professional models such as the Uniz Slash.

Which technology to choose

Today the dilemma could be reduced to two technologies: SLA or LED-LCD.

Despite the growth of LED-LCD technology, SLA technology is still the majority in professional environments. There are two reasons for this, firstly the high quality and accuracy achieved by SLA with printers such as Formlabs is difficult to match. On the other hand, new technologies need a transition period to make room in companies due to the need to amortise current equipment and the distrust of new systems with low implementation in their sector.

However, the new professional LED-LCD printers, such as the Uniz, can provide an important competitive advantage by allowing small series to be produced with a quality similar to SLA and in a fraction of the time. For example, in the production of models for lost-wax moulding, which is widely used in some branches of the jewellery industry and which can lead to significant savings, not only in time and resources, but also in costs.

The decision between one or the other must be based on the user's needs between precision and production capacity. In many cases they should be thought of not as rival technologies, but as complementary, having a team dedicated to the production of small series and another for more delicate and precise works.