> Blog > What does 3D printing contribute to the aerospace industry?

What does 3D printing contribute to the aerospace industry? 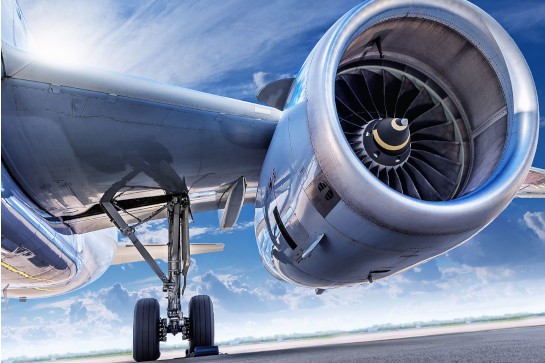 The aerospace industry is a highly demanding environment. It requires impeccable elements that are going to be able to withstand continuous wear, and high pressure and high temperature conditions. There is constant innovation and research going on to make sure the components are strong, resistant but also lightweight, to boost aircraft performance, make maintenance work easier and employees more productive. This indispensable quality and reliability has to be balanced with the schedules and booking of commercial flights, and the urgency and required 24/7 readiness of military aircraft. If anything goes wrong on the production and logistics chain, the availability, quality and even safety of commercial as well as military flights can be compromised.

The evolution of AM in the aerospace industry

This is where additive manufacturing enters the scene. In the initial stages of the evolution of 3D printing, it was an extremely innovative but fairly limited manufacturing method. The 3D printers were a costly investment, they were slow and too small to have large-scale industrial applications. Moreover, the material market was very limited, especially for technical engineering materials, and 3D printer manufacturers very often only allowed for their own materials to be used with their printers (vendor lock-in). Those times in 3D printing are long gone now.

Nowadays, additive manufacturing is a fully developed industry, with an outstanding flexibility of design and material-printer compatibility, specialistic software that allows precise design and reverse engineering, an ample choice of highly advanced materials for the most specialistic uses, large-scale 3D printers with big build areas, and the ability to produce lightweight pieces that do not have any disadvantage in comparison with their CNC counterparts.

The contributions of AM in aerospace

Any idea for innovation in the aerospace industry has to go through a very meticulous assessment process to check if the new material or technology meets the numerous and exigent FAA regulations for flight and aircraft safety, whether the aircraft is a commercial or a military one. Many obsolete aircrafts have components manufactured using materials that later turned out to be toxic and need to be replaced, or materials that simply are no longer manufactured and need to be recreated.

Additive manufacturing companies offer a wide range of filaments that are certified by the FAA due to their great tensile strength, and chemical and thermal resistance but without harmful side effects. Examples of such materials would be filaments from the PAEK family, such as the Essentium PEI 9085 ULTEM filament, Essentium PEEK or Essentium PEKK. These filaments can be used for in-flight applications. The ULTEM PEI filament was used to 3D print parts for lighting systems, electric switches, housings, and bulb sockets.

The PEEK filament has been used in the aerospace industry to replace aluminum engine parts, bearings, valves, as well as light conduit to insulate and protect optic cables and electrical systems inside of a plane.

The role of 3D printing in aerospace has passed the stage of only prototyping, although AM is still being used for that purpose. Given the scale and cost of manufacturing in the aerospace industry, the traditional ways of prototyping through injection molding and CNC machining are time and resource consuming. 3D printing a prototype of a plane or its part significantly reduces the cost of prototype production and adjustments, material waste and delays, and allows the production of way more complex structures than CNC. 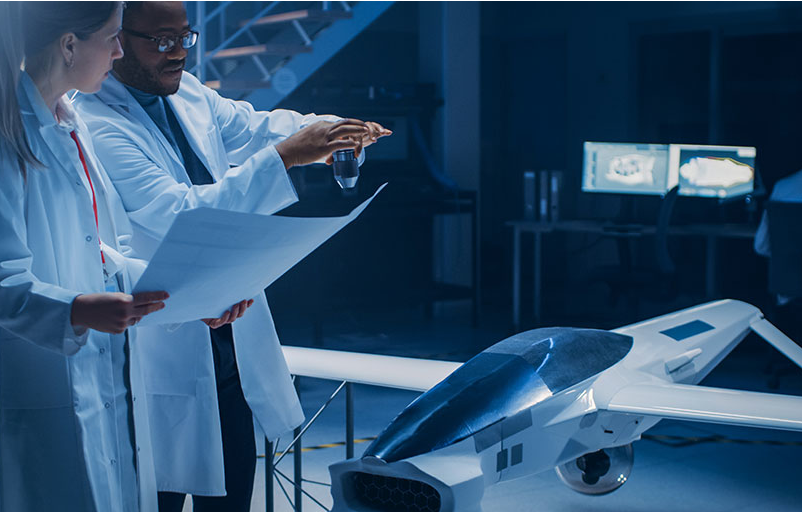 Image 2. A 3D printed prototype of a plane. Source: Essentium.

Apart from the manufacturing of components for satellites (antennas for spacecraft), drones and unmanned aircraft (rotor blades and engine parts), the most common AM applications in the aerospace industry are in the production of ground parts and non-critical non-load-bearing in-flight components.

As planes are a quite expensive investment, old aircraft units often serve way longer than they should. Additive manufacturing is the perfect technology for small maintenance tasks. These involve 3D printing missing or damaged non-essential components for the interior of the plane, such as cup holders, trays, toilet lids, air ducts, instrument panels, etc. Thanks to AM, it is possible to recreate an element even if the blueprints are missing, by means of reverse engineering - scanning the part, processing it in design software, and then 3D printing it.

The same applies to all kinds of tools, jigs and fixtures. In that respect, innovation with 3D printing is much easier to implement because ground support equipment is not subjected to such scrutiny by the FAA as air-worthy parts. Even if the original tool is no longer being manufactured, it can be 3D printed from plans or by adapting the tool design based on the screw or elements it is supposed to fit. With traditional subtractive manufacturing, this process would be much more time and material consuming. To make tools, jigs and fixtures light but efficient, materials reinforced with carbon fibers, glass fibers or metal can be used. It will result in parts up to 50 % lighter than aluminum but with excellent strength and temperature resistance. Some great filaments for this purpose would be the Essentium HTN CF25 filament, the PA CF filament, or the ABS MG94 filament. Apart from strength, resistance and lightness, some other features a filament oriented at the aerospace industry should have, are flame retardancy and ESD-safety. The production floor and maintenance zones are spaces with elevated temperatures, possibly explosive materials and static - a very dangerous combination both for the equipment and the employees. The Essentium TPU 90A FR filament has flame retardant properties, which significantly minimizes the risk of fire and its spread. It makes it perfect for tools, jigs and fixtures used in the hangar or around the plane.

Image 4. A safety part made with the Essentium TPU 58D-AS. Source: Essentium.

The Essentium TPU 58D-AS, on the other hand, is filament designed especially for the aerospace industry, for the manufacturing of pieces that are supposed to be removed before flight (hence the red color to call attention). The TPU 58D-AS reduces the risk of electrostatic discharge, which is a danger to humans and to electronic components, which are extremely crucial for the proper functioning of a plane’s navigation systems, among other functions. 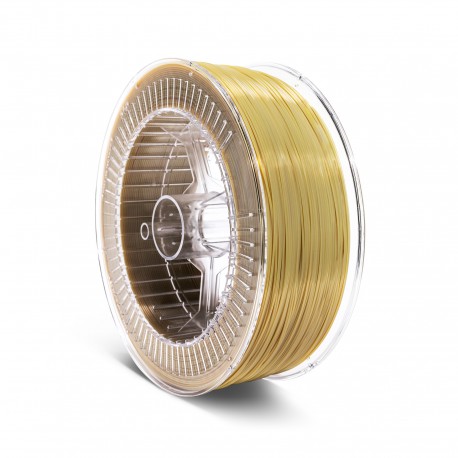 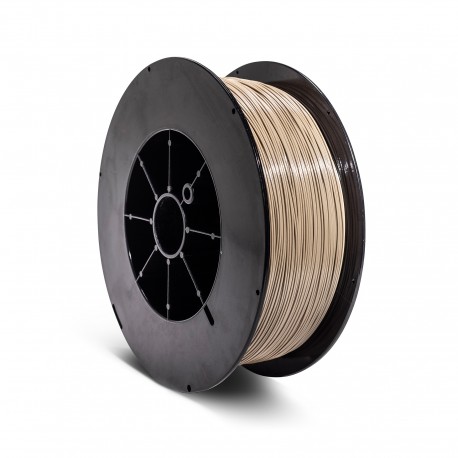 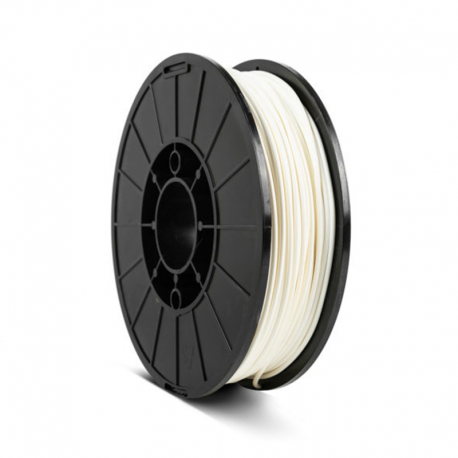 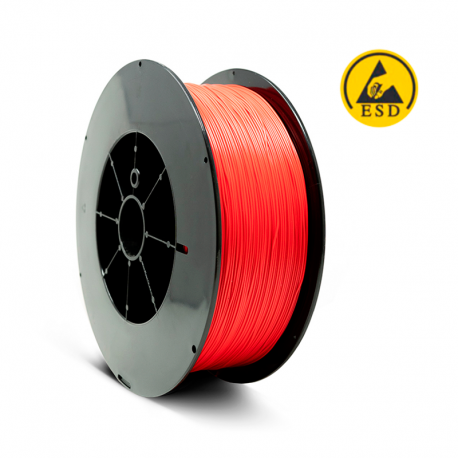 Maintaining planes in a safe and flight-ready and mission-ready condition in both commercial and military aerospace industries is extremely crucial, even more crucial than constant innovation. Additive manufacturing has so many applications in those industries precisely because it allows passenger carriers, courier companies, and armies to have more independence and flexibility in the maintenance of their aircraft.

The Covid-19 pandemic has changed the world in so many ways. The aerospace industry was no exception, since a lot of supply chains were suddenly on pause for unforeseen periods of time. That has stalled production, maintenance and delivery operations due to the dependence on contractors and delivery companies, a consequence of a traditional manufacturing model. Many commercial airlines suffered great financial losses due to the cancellation of flights, and that meant having to look for new ways to reduce costs. Additive manufacturing can be the answer to that.

With traditional manufacturing, such as CNC, the production of an ESD-safe component, a corrosion-resistant components, and a high temperature component would most likely require using the expensive services of three different contractors, varied and long waiting times (also depending on the contractor’s supplier), and a complicated or impossible delivery in the case of military aircrafts stationed abroad. 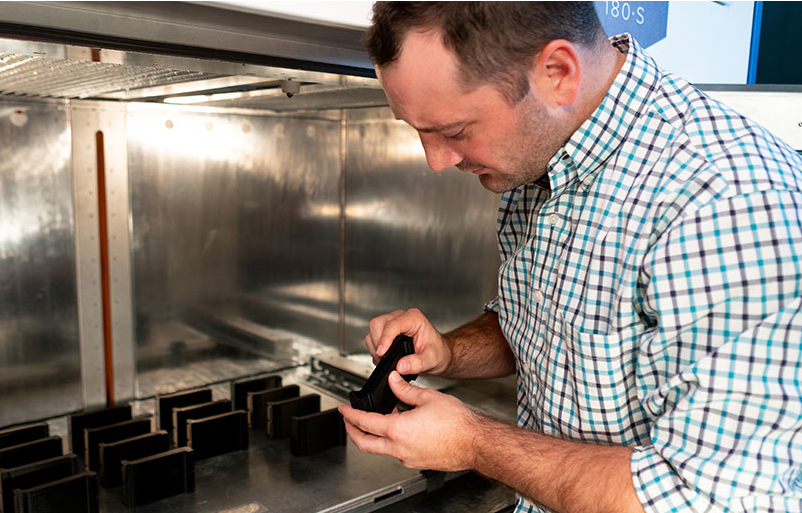 Another issue is that one-off tools or limited run replacement parts are ubiquitous in the aerospace industry. Resorting to injection molding or CNC machining to make a unique tool for a one time use only would imply unnecessary costs and unnecessarily long waiting times. All that can be solved with 3D printing, since a single 3D printer can be used on-site to produce all those parts with different advanced technical filaments at a much lower cost and with a lower risk of delay. This way of manufacturing also eliminates the need for warehousing spare parts all over the world to perform maintenance tasks, since any needed part can be 3D printed anywhere at any time on demand. All those small improvements lead to an overall simplification and shortening of the supply and production chain in aerospace, which consequently reduces the costs, and balances out the carbon footprint that planes leave.

A great example of the application of AM technologies in a real life aerospace context is the Axle Box company. They developed a drone platform for SkyFire, for their forestry and fire protection clients. These elements had to be able to withstand the conditions of a big scale airborne firefighting operation - fire, water, and wind. The parts were produced at the lowest cost and with the fastest lead times in comparison with competition. A drone mid-body was 3D printed with the Essentium HTN CF25 filament and side covers with the PA CF filament. Both materials performed beyond expectations in flight tests, demonstrating great mechanical properties and high speed.

A very common malfunction in planes is a hydraulic failure, mostly due to the weight of the aircraft and the stresses it endures during a flight. The process of repairing a hydraulic failure used to be very demanding in terms of time and manpower, because it required several technicians to access the source of the malfunction and then hold the replacement in place while it was being installed. Those hydraulic failures occurred so often and were so costly to repair that a major aerospace manufacturer decided to 3D print a brace that would hold the replacement part in place, with no need for additional manpower to assist in the process.