One of the great advances in the field of industrial engineering has been the development of reverse engineering processes. This consists of extracting information directly from a physical system and translating it into a digital model.

Reverse engineering provides many advantages when modelling and simulating a system or product. On the one hand, it allows direct information to be extracted from the model, which is more reliable and of higher quality, and on the other hand, it speeds up and shortens work times. This allows complex systems to be modelled more reliably and in less time.

One of the fields in which reverse engineering has been most successfully applied is metrology, with the digitisation of complex geometries.

3D scanning is the process of converting a physical surface into a digital model. It consists of extracting the relative position of multiple points on that surface (point cloud) and digitally interpolating the surface containing them, thus reconstructing the geometry of the part.

The main parameters defining this point cloud are resolution and accuracy. Resolution is given by the minimum distance that can be resolved between two points and accuracy by the error in determining the real position of each point. A higher resolution will allow smaller details to be captured while a high accuracy will provide models with dimensions that are closer to reality and therefore smaller tolerances.

Devices designed for this purpose are known as 3D scanners. There are many types depending on their technology, and they can be classified into two main groups: contact and non-contact.

Contact 3D scanners are probably the least common, although they are some of the most accurate. They consist of an articulated arm, usually with 6 degrees of freedom, with a stylus at the end. The operator traverses the surface with the stylus while sensors record the position at a specific frequency. The main disadvantage of this technology is that it requires the operator to scan the entire surface with the stylus, which can be a very slow process. On the other hand, the friction of the stylus on the surface can damage the surface, which can be problematic with archaeological artefacts or works of art. 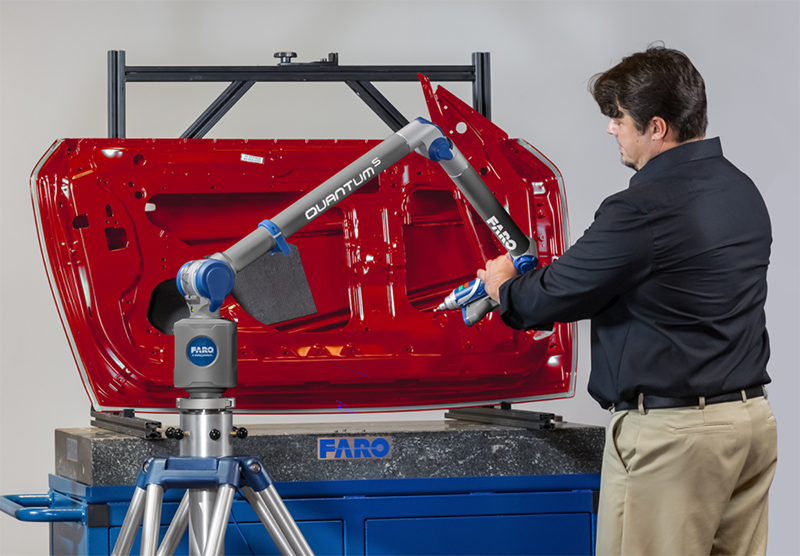 Non-contact scanners are based on optical technologies and fall into two categories: passive systems and active systems.

Passive systems are mainly based on extracting the geometric information of a surface from photographs taken from two defined viewpoints, a technique known as stereoscopy and based on the parallax effect of human vision. Its main advantage is that it can map large surfaces quickly and cheaply, but its resolution and accuracy are very low. Moreover, it does not allow real measurements to be captured, so it requires a complementary system that allows the model to be rescaled to its real dimensions.

Finally, there are the active non-contact 3D scanning systems. This is the largest group and the most widely used in industry, art, medicine and entertainment.

This type of system is based on measuring a signal that is emitted on the surface. Although any type of signal capable of interacting with the surface can be used, such as ultrasound, the most common systems are optical.

Time-of-flight (Tof) 3D scanners: Based on calculating the distance to the surface by measuring the time it takes for a pulse of laser light to travel to and from the surface. It combines a long range with a high frequency of point acquisition. It is mainly used for mapping large structures or as a metrological tool to determine deformations in structural elements. Nowadays its non-professional use has become commonplace thanks to its implementation in some phones such as iPhones thanks to its lidar sensor.

Triangulation or laser 3D scanners: They consist of a laser emitter and a photodiode array sensor, positioned at a certain angle. When the laser beam is reflected on the surface to be mapped, it is incident on a certain point on the sensor, depending on the distance to the surface. This makes it possible to triangulate the position of the point where the laser beam is incident. This is one of the most accurate systems, however, it depends on the angle at which the laser is incident on the surface, so it requires very short working distances. It is suitable for mapping small to medium-sized objects with high resolution and accuracy.

Phase difference scanners: This is an intermediate solution to the two previous ones. They consist of a modulated laser emitter and a detector, and determine the distance to the object by comparing the phase of the emitted and received light. They have a good working distance and medium accuracy, making them suitable for mapping large objects with good accuracy.

Structured light scanners: Probably the most common today. They are the most versatile 3D scanners because they combine excellent resolution, high accuracy, high acquisition speed and low cost. They consist of a camera with a calibrated lens and a projector that projects light patterns onto the surface. The camera captures images of the deformations of these patterns on the surface and by means of complex processing algorithms generates the point cloud. This system allows hundreds of points to be obtained in each capture, so it has a high acquisition speed. Furthermore, depending on the lens used, it is possible to adjust the working distance, precision and resolution. They also have the advantage that many models, such as those from Thor3D, can be used handheld, without the need for a tripod. Their main disadvantage is that they are sensitive to ambient light conditions and the finish of the part, so 3D scanning must be carried out under appropriate lighting and in the case of glossy or transparent surfaces it may be necessary to apply a special matt paint.

Generally, 3D scanning systems do not capture continuous data, but discrete positions of the surface to be captured. This is known as a point cloud. The point cloud obtained by the 3D scanner cannot be used directly, so several post-processing tasks are necessary to achieve the digital replica.

The final quality of the model will depend, in addition to starting from a quality point cloud, on its correct processing. This requires software with good reconstruction algorithms and some knowledge of point cloud processing.

First of all, in case the 3D scan has been performed in multiple captures, the different point clouds have to be aligned and merged to achieve a single cloud covering the whole model. The accuracy of aligning the point clouds will largely depend on the tracking capabilities of the 3D scanner. Marker tracking will always be the easiest to align, however, there are cases where markers cannot be used, such as in the case of artwork. For these cases, some scanners, such as Calibry or Calibry Mini, incorporate multiple tracking options, such as texture tracking.

Next, the point cloud must be cleaned by removing those points that do not correspond to the surface, either because they belong to objects in the environment or because they appear due to an error in the 3D scanner. A quality 3D scanner together with a good scanning process will provide a clean point cloud with few or no excess points.

Once the point cloud has been cleaned, it will be necessary to reconstruct the mesh. The selection of appropriate parameters will provide accurate and correctly adjusted meshes.

After converting the point cloud to a polygon mesh, it will need to be checked and repaired. One of the most common defects is usually the appearance of gaps in the mesh due to missing data during scanning. The only way to repair these defects will be to apply a patch by interpolation. The quality of the interpolation algorithms implemented in the software will influence the quality of the reconstruction.

Image 3: Repairing a hole in the mesh with Calibry Nest. Source: Thor3Dscanner.com.

Finally, it will be necessary to optimise the mesh. The type of optimisation will largely depend on the final application. The mesh can be simplified, sacrificing resolution at the cost of reducing file size. Mesh simplification can often help to correct small defects, achieving simpler and more homogeneous geometries. On the other hand, mesh resolution can be increased by interpolating new elements. Increasing the mesh resolution does not increase the resolution of the capture, however, it can help to obtain greater continuity and smoothness in surfaces with curvature.

Some 3D scanners, such as those based on structured light, allow the texture and colour of surfaces to be captured simultaneously through photographs. This allows an additional step in processing by allowing texture to be mapped onto the mesh. This is especially interesting for applications related to art and entertainment.

There are many possible applications for 3D scanners in different industrial sectors. In medicine and orthopaedics, for example, they can digitally replicate parts of a patient's body to develop customised orthoses. In the field of entertainment, they have been widely used in film and video games to create digital twins of actors. They are increasingly used in art and archaeology to produce digital replicas of works of art and historical artefacts for scientists around the world to study. In engineering, they have made it easier to draw up plans of complex parts, reducing work time and achieving more accurate models. In inspection, they make it easier to compare the geometry of a component over time to detect deformations that help prevent failure.

3D scanners are nowadays an indispensable tool in many sectors. The development of new techniques, such as structured light, has led to new 3D scanners that offer high resolution and accuracy, combined with high data acquisition speed and an economical price. Examples are the new Calibry and Calibry Mini scanners or the EinScan series from Shining.